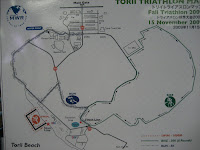 When my alarm went off at 4:38am (What can I say? I like numbers that are divisible by 3) I felt amazingly rested. Then Chris got on the computer and told me that the water conditions were within the legal limits and that we should be good to go. That was the point where I began to feel sick-to-my-stomach nervous. Most nights before a race I'm restless and anxious, but the night before this race I slept like a baby. Apparently it was because I had a deep belief that the race would be cancelled due to the crazy waves we've been having for the last few days. 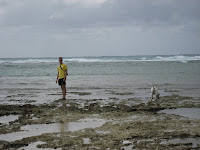 The above picture isn't to show how cute Chris and Rana are (although they definitely are), but shows a little bit of the wave action. This was the day before the race and was low tide so the waves were pretty far off shore, but they were still pretty big. The dive report we heard on the radio mentioned 8-10 foot waves. Certainly, we're not doing a triathlon in that, right?! But the waves calmed down by Sunday morning and we were good to go.
It might sound like I didn't want to do this triathlon or that maybe I had been talked into it and was having second thoughts. But no, I was the one that talked Chris, as well as our friend BJ, into doing the race and I really did want to do it. I was just scared. I have never done an open water swim. Chris and I were going to practice last Wednesday, but the waves were massive so we stayed out of the water. Plus, this triathlon was swim heavy - meaning the swim portion was long when compared to the distances for the other 2 legs.
Before the race we set up our transition areas: 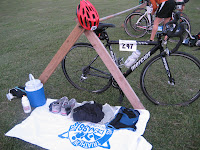 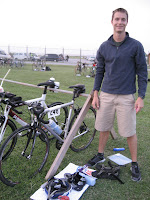 We were lucky to get there early and get spots on the end. That leaves you more room to set up your outfit changes and other needed supplies. We also took a picture as we checked out the swim portion: 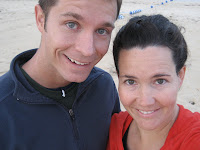 After checking out the course and organizing our transition zone, we suited up: 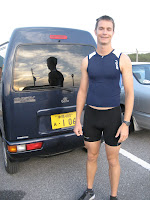 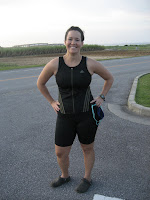 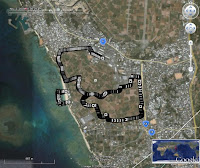 The swim portion is the staple-looking shape on the left side of this Garmin map (picture courtesy of Mat Luebbers and Google Maps). We would swim on the outside of a buoyed rope for 100 meters, take a right and swim 300 meters, take a right and head to the shore for 100 meters, get out of the water run around the cone and then swim inside the rope for 100 meters, take a left and swim 300 meters, and another left would get us back to shore in 100 meters. That's a total of 1000 meters! I know that in the pool I can swim that distance with no problem, but open water is a whole other beast. In the pool I can kick off a wall, see the bottom, and maybe most importantly I don't have 100 other swimmers trying to swim in the same spot as me. 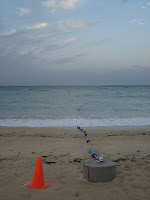 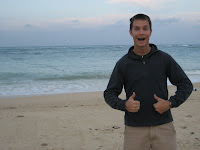 Before the race Chris gave me some great advice - when the starting gun goes off, don't jump right in, just count to 5 and then start. Well, the excitement of the race got the better of me and I might have only waited 3 seconds, but it was still better than having everyone swimming over my back. The water was a warm 77 degrees and the waves were slightly choppy. The first 100 meters were alright, but it got much harder once I made the right into the first 300 meter segment. This section was the worst part for waves. I swear whenever I breathed I was looking at the same palm tree for about a minute. It was some slow going. However, I didn't panic (my biggest fear during the swim section was psyching myself out) and just kept on plugging away. The 100 meters to shore was easy because we were going with the waves. Besides being patient on the 300 meters, the hardest part of the swim was getting out of the water, running around the cone, and getting back in. I have got some tender feet and running on the coral and shells definitely made me cringe. The second 500 meters seemed much easier and I was done in no time. I hit my split button a little late, but finished the swim in about 23 minutes.
After the swim came the longest transition zone ever. From what I've seen on TV, most races you get out of the water run up the shore, and you're at the bike transition. This race you got out of the water and ran up a road for over a quarter mile to get to the transition - all barefoot! It was a smooth road so it wasn't bad, but again I've got wimpy feet.
At the transition, I quickly changed from my swimsuit top to my jersey with my race number on it and slid some bike shorts over my swimsuit bottom. The bike ride was 30 km (18.6 miles) and I didn't want to do it without padding. I also had to get on socks and shoes. Including the run to the bike and the clothes change, this transition was a little long with 3minutes and 37 seconds.
Nothing too eventful happened on the ride. I think the ride was a little short (my Garmin registered 18 miles) and we had to complete 8 laps. The first half of each lap was uphill and upwind, but the second half was a fun, downhill ride. I need to figure out how to bike smarter because I got passed a lot on the bike even though I felt I was going a pretty good speed and putting forth decent effort. I did use the bike section to fuel up with 2 fig newtons and drank some water. I actually got pretty good at biking and drinking at the same time. I finished the bike portion in 1:06.22. Here's a picture my friend Martha took:

I love how happy I look and think my crooked helmet looks jaunty.
At this final transition, I flew out of my bike shorts, slipped on a skirt, and traded my helmet for a visor. All of that was done in 32 seconds.
After the bike ride all I had left was a 5 km (3.1 mile) run. Getting off the bike my legs felt pretty good, but my arms were a little numb and tingly. That didn't last long though and the rest of the run I felt great. The run was an out and back with the first half being uphill. I let myself walk for 20 seconds on the loooong uphill. My legs felt great, but my breathing had gotten away from me. After the walk break I was unstoppable. I passed people on the uphill, I passed more people on the downhill, and had a sprint finish. My run time was 26:45! Woohoo! My total triathlon time was 2:02.14. The whole race was so much fun. I think I'm officially hooked on tris!
Here are a few more picture after the event. There aren't as many pictures during the event as Tour de Okinawa because we were both racing (as opposed to just riding) and it's hard to carry a camera around when you're transitioning between 3 sports. 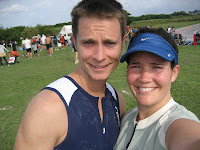 The above picture was taken right after I crossed the finish line. I love that we look more awake and perky than we did in the before the event picture. Check out all the salt on Chris' jersey!
BJ and Chris: 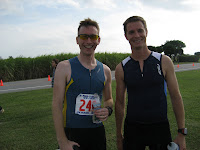 Me and Chris with our free Subway! 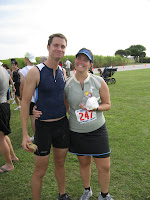 Just chill-axing before the award ceremony. I knew I wasn't winning anything, but they also had some great door prizes. 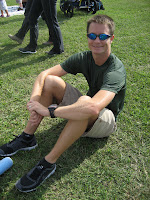 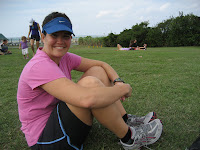 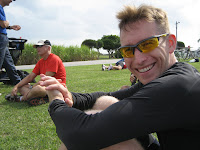 And while none of us won any of the door prizes, Chris did bring home some hardware! 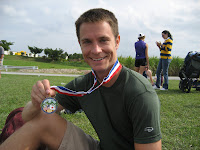 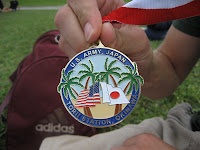 Chris got second in his age group (18-29) and we think he completed the race in about 1 hour 38 minutes. There was no big race clock with times, but since he was returning from the run when I was heading out we figure he was about 25 minutes in front of me. He was very happy with his race, but made the realization that he's going to have to get faster if he wants to place once he moves up in the age category next year. I tell you the 30-39 year old age class is a tough one for men and women.
I feel like a real triathlete and I can't think of a better way to spend a Sunday morning. 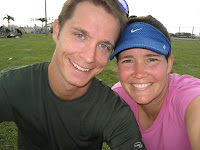 This sounds like such fun. Open water has always worried me which is why I won't do anything like that. If the swim was in a pool I would be there. Well done, super people.

What an awesome race report!! Thanks for sharing all of this. Makes me want to do another tri right now so bad...darn this midwest winter thing!!
Sounds like you learned some stuff on this tri too which is awesome..always learning will make each race better! Congrats on your great finish and great time on the run!
Courtney
Adventures in tri-ing

Loved the report. My brother just finished helping out at Iron Man in Clearwater. He got into tris a few years ago. Nathan would like to get into it but he is just way too busy these days. I'll stick with my 1/2s that is enough for me. You guys are awesome!
-Leslie

What a great race report. You look so happy in all of your pictures!! Aren't tris just so much fun!?!

Chris and Amy, you rock!!

How fun! Good for both of you.
Monica

[b]**NOTE:[/b] We are your ONLY Free Softcore Adult Playground with over 20 Free Social Communities built towards your favorite fantasy.

You don't have a favorite fantasy? You should.

Don't worry, we have you covered.

With over 20 Free Hot Social Communities to upload Pictures, Videos and Blogs we are sure to have what you want.


[b]Check it out, have some fun, interact and enjoy all the free stuff.
[/b]

Survival group against God?? LOL. Good luck with that. Truth is, no one knows the exact time this will happen except the man upstairs, however, I firmly believe that there are people placed here by God that post the warning signs and it's up to you to take heed.
[url=http://2012earth.net/global_economic_crisis_2012.html
]Nibiru
[/url] - some truth about 2012