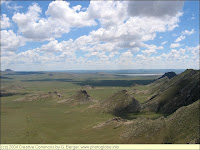 So, experts always say you should learn at least one new thing a day. I thought today we'd learn a little about Mongolia. I know my Geography Bee winning husband would know, but does everyone else know where Mongolia is? Well, let's look at a map:

There it is, nestled nicely between China and Russia. Mongolia is the second largest land-locked country in the world. You can tell by the star on the map that Ulaanbaatar is the capital (Chris isn't the only geography whiz in this family) and it also holds about 38% of the population.
Mongolia is a land of nomads and its most famous nomadic ruler was, of course, Genghis Khan, who founded the Mongol Empire in 1206. During the 17th century Mongolia fell under Chinese control and remained there until the collapse of the Qing Dynasty in 1911. Although declaring independence at this time, China held on to Mongolia for another decade and international recognition of independence did not occur until 1945.
During this time of unrest, Mongolia fell under Communist Russia's influence. This control lasted until 1990 when Mongolia had a Democratic Revolution. This revolution led to a new constitution, a multi-system party, and a market economy.
30% of the population still remains nomadic and the predominant religion is Tibetan Buddhism.
That's enough history (thanks wikipedia), now on to some fun facts:
-Mongolia is the most sparsely populated country in the world
-Mongolia is among the highest countries in the world with an average elevation of 1580m (this one scares me for reasons you will still discover)
-The Mongol Empire covered most of Asia and some of Europe at its peak
-The Gobi Desert in southern Mongolia is the site for over 150 dinosaur discoveries
-The two humped camel is indigenous to Mongolia
So, why oh why do I care so much about Mongolia all of the sudden? Because I'm headed there in July! In previous posts I've mentioned my wonderful trail running group (WOOT - Women On Okinawa Trails). Well, 5 of us plus 2 daughters are headed there in July for the Sunrise to Sunset (please click on this link to check out pictures). This is a marathon and an ultra marathon (in this case a 100km/62 mile) race. Right now you're thinking, "Amy has officially lost her mind". You might be right, but I'm not approaching it as a race because you have 18 hours to complete it. I know there will be lots of walking because check out this race profile:

I've got to admit that climb between 12 and 17 km makes me a little sick to my stomach every time I look at it. Seriously? An ascent for 3 miles? Yikes! I am officially stopping at the 42km marker, but hope to unofficially make it about 50km so I can say I ran an ultra in Mongolia. When I first started thinking about this race, I was thinking that if I complete it I will be a total bada$$, but then 2 of the ladies going with me registered for the 100km race. However, I am totally ok with them being the official bada$$es and me just being a baby bada$$!
The race is at Camp Toilogt near Hovsgol Lake:

The race fee includes staying at the camp for a week to adjust to the altitude. While we're there we can kayak, fish, horseback ride (probably not doing that after my South African experience, Sandy!!), and check out the trails. One of the coolest things? We get to stay in authentic gers (the Mongolian yurt):

It's going to be awesome!! I can't stop thinking about this adventure. We're registered and we have our flights. Now all we need to do is train. Mongolia get ready for WOOT!
Posted by Chris and Amy at 12:08 AM

What an adventure. It all sounds such great fun. How I wish I could do it with you too. I can't wait to hear all about it when the time comes.

You are a baby badass!!!! Loves it...that is so awesome. This is going to be intense...better kick that cross training into high gear. Can't wait to follow along with your training!
Courtney
adventures in tri-ing

OK, I totally thought Mongolia was another country. I had no idea where is was on the map. Thanks for teaching me my new fact(s) for the day. You will have a great adventure I'm sure. Especially once the chiro gets you fixed up! I'm proud of you.
Monica