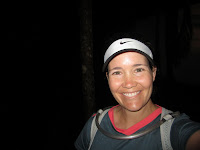 On Saturday, 19 March I set out for the biggest challenge of my life, but first let's back up. A little more than a week before I had traveled to New Zealand with 6 friends from WOOT (Women on Okinawa Trails). Five of us were coming from Okinawa, one was meeting up from Alaska, and Tiff was starting from Illinois. We've all run together for about a year and 5 of us had made the journey to Mongolia last July for a trail marathon. We have a wide range of runners in our group, including multiple Boston Qualifiers and more average runners like me - a 4:30 marathoner.
Maybe I was just cranky or maybe I'm just used to being on my own a lot since Chris is often away, but by a few days into the trip I was ready for some alone time. I was really looking forward to my 10 hours alone in the woods.
We lined up in pre-dawn hours with the goal of completing 60K through NZ terrain. Anna and Andrea originally signed up for the 100K and had completed some incredible training - extremely long back to back days of running.
We started at the Redwoods Visitor Center in Rotorua. I loved this starting point because it reminded me of my summer vacation's at my grandparent's house in the Bay Area of California. On parts of our drive earlier in the week I spied eucalyptus, but I didn't smell any of that distinct, crisp smell as I waited to start the race. The Tarawera Ultra is in its third year and had over 200 runners split between the 60K, 85K, 85K relay, and 100K. 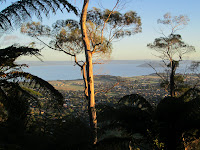 Daylight broke just in time for the start and no head lights were needed. The start was a good climb out of the visitor center with both steep inclines and stairs added in for fun. There was kind of a weird rhythm of running the downhills and flats that might last 20 seconds and then everyone would walk the uphills and stairs. I knew I was near the back of the pack and I was ok with that. I didn't know what to expect from this race. I've never gone this distance and I wasn't sure how to pace. I do know that once we got to the top it opened on to a beautiful landscape with a lake and the town of Rotorua in the distance. 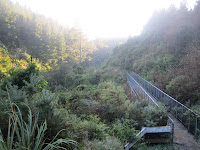 The sun glimmering off Blue Lake made me smile and the fun descents had me giggling out loud. I loved this portion of the race. The first section was about 12km before we hit the aid station. The aid station was fully stocked with jelly beans, chips, ginger, endurotabs, water, coke, and heed. The volunteers were all lovely and after a quick chit chat I was off again. 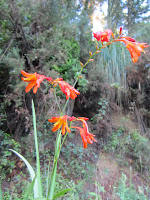 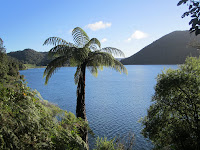 The second and third aid stations came up quickly because they are on the only road portion of the run and they are close together. I believe the second aid station was around 17km and the third at 20km. The second aid station had a timing mat and I clocked in at 63rd place, 22nd among women. I had gained a little speed on the road portion, but the last K up to the third aid station was a steep uphill and I took advantage of the walkortunity. There was a photographer right before the aid station. I asked him if I should pretend to run and he said that might be a good idea. The result was the best race photo I've ever had!

I had studied the race map and knew that the next aid station was a long way away so I took the time to refill my 2L Nathan hydration vest. Also, for those who like running details, I was eating 3 Clif Shot Bloks about every 45 minutes. I would also eat a couple jelly beans and a couple potato chips at the aid station. The weather was perfect - low 70s and even though it was sunny the trail was shaded for the most part. While running the first 20K I stayed in very good spirits and was mentally strong. There were parts on the road that I knew I could push faster, but I wanted to be able to have something left at the end. Being so new to this kind of distance made it a little tricky to know how much effort to put out. I wanted to give 100%, but I wanted that 100% to last the whole race. It was hard to know where the balance was. 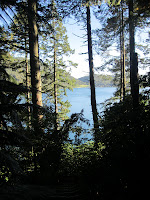 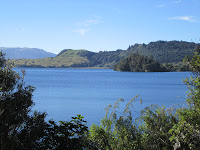 Between aid stations 3 and 4 there were about 17km. I saw an older gentleman on the course with no hydration pack or bottles. I don't know how he did it. They told us we could drink out of the creeks or lakes, but I didn't want to chance it. I was rationing out my water for this long section, but I was constantly thirsty. I had started hydrating a couple days before the race so I don't think I was dehydrated, but the longer I ran the more chips I ate at aid stations. I was definitely craving salt. 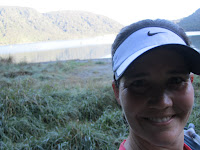 There were lots of steep climbs in this section and I would walk when needed. The website describes this section as "a test of fitness it is superb". During the entire race I was able to run all the flats, downhills, the rollers, and some of the not so steep inclines. I was really happy with that. This race really alerted me to the fact that I need to work on climbing. I trained on hills in Okinawa, but we've got nothing like the mountains in NZ! My legs would actually feel ok on the hills, but my breathing became labored and my heart rate would sky rocket. The entire race took place between 400m and 1400m above sea level. I know that doesn't seem like a lot, but it was constant ups and downs. At some point in this section I passed Kathleen who was slowed down with abdominal pain. 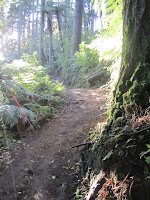 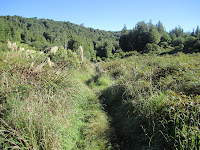 (Please continue to part 2 because blogspot won't let me upload more pictures to this post).
Posted by Chris and Amy at 4:38 PM

What breed is your dog?

The news which is telecasting all the information from all the
sides of the world is called as world news. What is interesting is
that you get to read news and analysis that give you an entirely different perspective,
rarely seen in corporate-sponsored media. The facility of websites and online news are also getting lot of appreciation because it is very time saving
and people can read it in between their work.

But it's always wise to check in with a doctor before you start using a supplement regularly. Skiing and snowboarding are strenuous sports which demand a lot of endurance, so your usual set of ten to fifteen reps really isn''. Smoking can affect your health and fitness since it affects all the bodily functions and damages vocal cords and skin.

This piece of writing provides clear idea in favor of the new people of blogging, that truly how
to do blogging.

Hurrah, thatís what I was searching for, what a information!
present here at this web site, thanks admin of this website.

It improves blood and oxygen flow to the muscles that are recovering from the prior hard workout.
Then you'll have no trouble motivating yourself to do it. What I tell my clients is that they need to schedule their fitness time like it's
a doctor's appointment.

Feel free to visit my webpage :: fitness tips and workouts

So, while I am no roving reporter I am endeavoring with my menial reporting
skills, to bring you. Researches have also found the Broccoli also contains necessary
enzymes such as myrosinase in it. Thus they can choose from the many available
sources.

I am really loving the theme/design of your website.

Do you ever run into any internet browser compatibility problems?
A handful of my blog audience have complained about
my blog not operating correctly in Explorer but looks great in Chrome.
Do you have any suggestions to help fix this issue?


Check out my blog - moodlesocial.com

Based on my own experiences I am going to make five recommendations that I wish someone had made to me to help take the
fear out of fitness. You have to find a way to take the tips you learn and make maximum
use of them. Get your heart rate up with a quick burst of fast movement.

The new tablet would be a further extension of these concepts
and yet another step into the future of computing for Apple.

Office goers and people who are travelling often do not get time to read news from the newspaper or
watch it to get good information they could subscribe for sports SMS alerts.
If a person is connected with the latest headlines, it will develop an awareness in him with regards
to the world which surrounds him.

A lot of us who are under constant pressure tend to eat too much and do not take good care of their
bodies. ' The picture is just as worrying for youngsters - by 2010, it's predicted 22 per cent of girls and
19 per cent of boys between the ages of two and 15 will be obese, with girls under 11 at particular risk.
The decisive factor is that men would want to show themselves as
hot and rock solid before the fashionable ladies as ever.

But it's always wise to check in with a doctor before you start using a supplement regularly. By now it's a well established scientific fact that outdoor exercises are really good for your mental and
emotional, as well as your physical health. Smoking can affect your health and fitness since it affects all the bodily functions and damages
vocal cords and skin.

Here is my webpage http://test.chao.org.pl/Reliable_Advice_To_Support_You_Access_Your_Health_and_fitness_And.