The Adventures of Amy (and Rana) 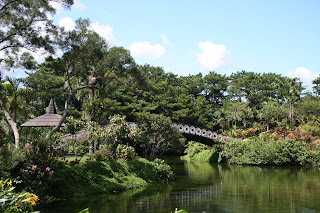 So, I'm going to come clean and admit that I've been moping for the past week or so. Pretty much as soon as Chris had to go back to work I went into full time mope mode. At first I could blame it on the fact that we only had one car and if Chris was on base I was pretty much stuck at home, but then Chris got his van and for almost a week while he went to work I still didn't venture out. But, that is all changing now! I gave myself a good talking to and a good kick in the rear and am committing to going somewhere new at least once a week. This might be a new beach, restaurant, store, whatever. As long as I get myself out of the apartment. No more "woe is me" and no more being scared of getting lost when trying to find things. Ok, I'm still a little scared of getting lost, but I'm not going to let that hold me back.

So, my first adventure I played it a little safe and headed to the Southeast Botanical Garden

Okinawa. It's only about 5K from the house and I had seen signs before so I was fairly confident I wouldn't get too lost and I didn't. Rana and I got there safe and sound and boy were we in for a treat. The botanical garden is absolutely gorgeous! All around Okinawa there's lots of green and trees because the weather makes it so things are constantly growing, but the garden was amazing. I don't think I've been anywhere that was so perfectly manicured. As we were walking through the word that kept running through my head was lush. I mean we are living on a tropical island so I should have expected it, but everything was just so...lush. They had over 40 species of palm trees, tons of hibiscuses (hibisci?), bouganvilla, lilies, and some fantastic water features.

It was a very hot day and Rana was all too happy to check out the water features. I'm doubting that this was really allowed, but I was totally willing to play the dumb American if it meant that she could cool down a little. The first time was no biggie because it was just a shallow fountain

area that she could jump in and out of. The second one, however, proved to be a bit more tricky. There was a long, rectangular pool that was just covered in water lettuce. I thought Rana was just going to take a quick drink, but I should have known better because she jumped right in. Unfortunately the walls were straight up and down so here I am with the big digital camera around my neck, carrying a backpack and fishing my little frog dog out of the pool. Luckily noone was around so we just pretended like nothing happened.

Most of the time I let Rana choose our path because she's pretty smart about heading for the shade. With this random method of travel I'm not sure if I saw everything but everything I did see was fantastic. I think my favorite part was this pond that had to be at least an acre and it was just full of lotus. It's not blooming right now, but the leaves were still beautiful and green and the brown, honey-comb like seed holders were really cool. There were lots of boardwalks criss-crossing the pond and lots of picnic areas that were great for resting a pooped pup.

We spent about two and a half hours exploring before heading for home. The only thing I would do different the next time (and I know there will be at least one next time Mom) is take some bug spray. The mosquitoes were pretty fierce, but not bad enough to take away from the fun of the day. Of course you know I took way too many pictures so after I sort through them I'll post some. It shouldn't be more than a day or two. Stay tuned for more adventures with me, possibly Rana, and maybe I'll make a friend some day to take along as well. You never know...
Posted by Chris and Amy at 5:26 PM