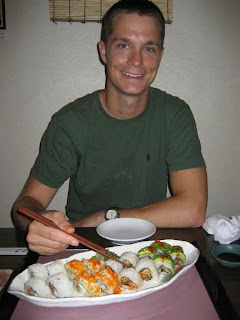 Well, this weekend was a doozy. We went from doing nothing last weekend because of the nasty weather to having multiple activities each weekend day. It was nice to feel busy again.

We started Friday night by going out to dinner with some folks from Chris' squadron - Cassie, Rob, Sam and Lily, and another couple who just arrived to the island. We went to a place called Sushi Zen and it was incredible! It caters to Americans so it was nice to actually have a menu in English. Other places might have an English menu, but that usually consists of a lot of pictures and maybe a word or two in English that may or may not help you understand what you're ordering. After living in England everything seems cheap here - even sushi. Chris and I were able to get a ridiculous amount of sushi and a glass of wine each for about fifty bucks. That might have fed one of us in the UK. The best part though was the sushi. It is so fresh here. My favorite was the Odyssey roll, which had shrimp tempura and cream cheese inside and avocado outside - just a little bit of heaven! We made a pretty early night of it and headed home after eating to let little Rana out.

Saturday was a big day for all of us, especially Rana. Saturday morning there was a 5K Fun Run/Walk with the profits going to OAARS, the organization that we adopted Rana from. Rana had an absolute blast being around all the other dogs, especially her foster sisters! It makes us think we should get another dog so she'll have someone to play with, but right now we just love her so much we don't want to share her with anyone else. The run was one lap around Camp Torii, a nearby Army base. It was a pretty route with one long, gradual hill at the end. Chris wound up winning the whole event while I was happy to make it all the way around with Rana. I thought we'd be able to run at least part of it, but after all the excitement of playing with other dogs before the race Rana flopped down on the dewy grass about 100 yards into the race. She did not want to get up. After getting her up she flopped down again about 20 yards down the road and I knew then that we wouldn't be running this race. However, I was able to coax her into walking the whole thing. She did quite well once we had her walking with her foster sisters - Mira and Sylvy. It was funny because Chris and I have walked her further than a 5K, but on this day she was pooped from playing. Amazingly, she perked up right after the walk and wrestled with some other dogs, got some great treats form the local girl scouts, and a bath in a kiddie pool. After that we went home and all took a little nap. 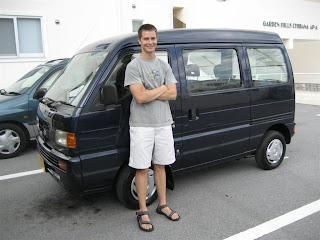 what Chris had been waiting for...His van was ready to be picked up! Woohoo! It's a little van made by Suzuki with 660cc and 3 cylinders. It is super cute (probably not how Chris wants it described) and it does have AC! Chris plans on adding a roof rack, but other than that it is good to go.

Saturday evening we headed to Rachel and Todd's (Rana's foster parents) for a going away party for their upstairs neighbors - AJ and Erin. Rana was invited and got to play for hours with her sisters. She had a great time. I was already excited about the party because it was my first opportunity to bake in a couple months. I made caramel bars and they were a big hit - woohoo! We didn't really know anyone besides Todd and Rachel, but after about an hour we warmed up and really started enjoying oursleves. It was a nice combination of military and civilian folks. Plus, noone worked in Chris' squadron so he wasn't sucked into talking about work. It was a very nice night.

Sunday we got up, walked the dog, and headed to Malibu Beach for a beach clean up. We 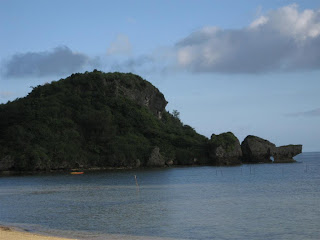 volunteered with an organization (O.C.E.A.N.) that not only does beach clean ups, but also goes into classrooms to teach environmental education. Hopefully, I'll get to volunteer with them more. It was pretty amazing how much stuff is on a beach to pick up - and at first glance the beach didn't even look dirty. We did a section of the beach for about an hour and a half and then sorted all the trash into categories so Edo and Naoko could take down data. It felt good to be doing something and everyone there was very nice - although half the people didn't speak any English. :) I really need some Japanese lessons.

After the clean up we went snorkeling. The water felt perfect and was very clear. We weren't really in a spot known for its snorkeling, but there were still hundreds of fish - clown fish, moors, butterfly fish, spade fish, trumpet fish, etc. It was pretty awesome. We did discover that we both 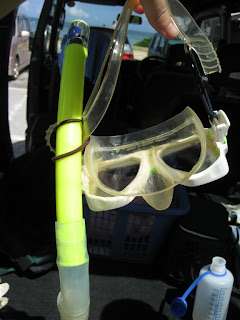 could use a new mask. Mine was super ghetto and was being held together by 2 hair bands and the loop off the key ring - Chris was super McGuyver on it!

We came home, took a quick shower and then headed out the door for a guy from Chris' squadron, Too Short, birthday party. He was having it at a park on base and he was working hard at his own birthday making some of the best chicken ever! He made some jerk chicken and then had some with secret ingredients that he called Black Magic. Whatever it was, it was delicious! He was a super nice guy, despite being an Ohio State fan! :)

After the party the squadron was playing some ultimate frisbee. We wound up having enough for teams (7 vs 7) and overall it was pretty fun. I was fairly disappointed that not a single other female played, but what can you do. And there's always the problem of boys thinking girls can't play so I got looked off a lot, but I'm sure the boys will wisen up eventually.

I think that's finally it. Man did we do a lot. I'm going to go ahead and post this now. I'll have Chris show me how to post the pictures when he gets home from work so make sure to check back in for pics of Rana, the beach, Chris' van, etc. Oh yeah, our internet should be installed on 30 September and then I'll be able to communicate a little easier. Have a great week everyone!

P.S. Check out some more pictures in the Pictures of Our Travels Link on the left side of the page!
Posted by Chris and Amy at 4:59 PM

That van is badass!