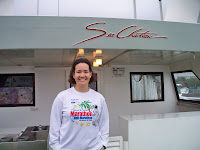 So, Sunday I went whale watching with Jessi and her husband Neil. One month old baby Kenny was there, but you wouldn't know it because I swear he didn't make a peep all day! That's my kind of baby. Well, for those of you who know me you know that boats and I often don't mix, but I really wanted to see some whales so I was willing to give it a go. In preparation for the boat I took the improved version of generic Dramamine (that's all they had at the BX - believe me, I'm willing to pay top dollar for no puking medicine). Well, I didn't get sick, but I didn't feel great either. Plus, this new and improved non-drowsy formula made me so sleepy that I literally had to take a 30 minute nap during our 3 hour tour (insert Gilligan's Island song here). It was a very gray day (which seems unusual for Okinawa), but it wasn't overly wavy - just enough to get a good rocking motion when we slowed down.
Honestly going into it I was expecting more. I was thinking National Geographic pictures and whales breaching the water's surface. Now, don't get me wrong. We saw whales, but it was more the water blowing from the spout, some backs just breaking the surface, and once we did get to see a whale's tail. The gray weather combined with the blue gray water and gray whales resulted in absolutely zero pictures!
However, after the whale watching we drove around Naha and found Kokusai Street. This is a big shopping district and where a lot of the festivals happen (it's where we saw the tug of war festival). In our search for Kokusai we found a covered street market that was a huge maze that I thought was way cooler than Kokusai Street, mostly because there were far fewer Americans. We wandered around, took pictures of signs and things that got lost in translation, and eventually ate lunch at Hotto Motto. This is a fast food place and I'll tell you it was a real struggle to find something on the picture menu that wasn't fried. What I ate tasted kind of like stir fry and was decent for fast food. We also checked out a Pachinko place (think slots), but left pretty quickly because it was so loud and smokey. From what I understand you aren't allowed to gamble for money in Japan so the machine spits out tokens or marble-looking things and then you trade these in for prizes. I took a little video clip so you could see how loud it gets, but the video isn't that great because you're not allowed to record in a Pachinko place.

So, here are some pictures of things I thought were cool or funny while in Naha: 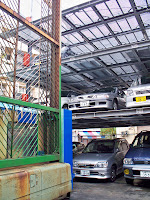 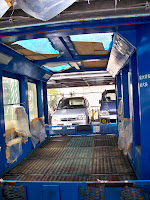 The place we parked our car was a triple decker parking lot, but instead of ramps that led you into your spot it was kind of like bunk beds. The garage man drove the car into the big blue elevator thing(picture on the right), made it go up, and then drove you car off into its space. 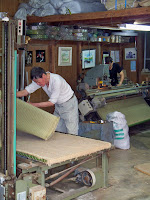 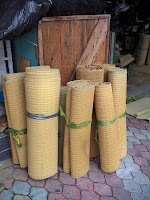 Close to the place we had lunch we saw people making tatami mats. These are found in traditional Japanese houses. Most traditional houses actually have a tatami room. 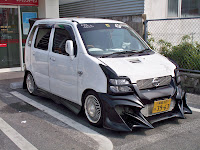 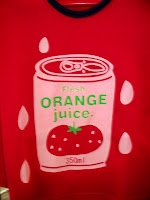 Japanese doesn't have the letter R so it often gets changed over to an L in translations and vice versa. If you look close this shirt says "Flesh Orange Juice". Mmmmm...yummy! 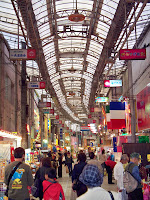 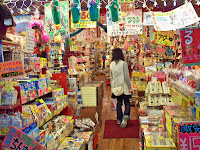 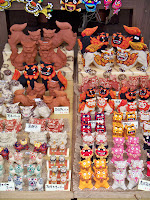 The cool covered shopping are we found, one of the souvenir shops in the shopping area, and a whole lot of Shisa dogs! I think almost a quarter of the store was dedicated to the Shisa. 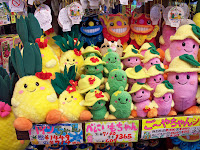 I keep wondering why Okinawans live so long and maybe it's their love of fruits and veggies. Stuffed animals of pineapple, bitter melon, and their local purple sweet potato are all very popular. I can't say I've seen an American kid hauling around their stuffed okra doll. 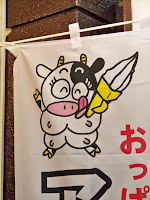 This was at an icecream store. Check out the ta-tas on that heifer! 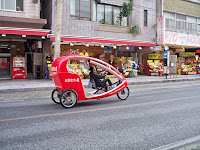 I took this picture mostly for Chris because he likes cool vehicles. It's the modern, Japanese rickshaw. 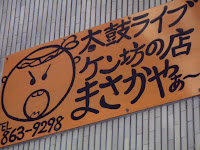 I've got no idea what this sign says, but boy does that baby look angry!

I hope you enjoyed this journey and I'll write again soon! I miss you all!

I loved the furry vegetables.

It was great to take the little journey with you. I look forward to the next one. Even better if it were real life but I'll take this as a substitute.

Thanks for the tour. You guys are really getting some neat experiences in. Now I sound like all my stateside friends when we lived in England. Oh well what can I say the sights in TX can't compare with Japan. We did go sking in Utah last week. That was really nice.
-Leslie