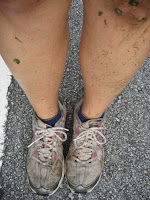 So, today was the day that I decided to up the ante. I started a Weekend Warrior fitness class over on Camp Foster. The guy that runs it is a Marine and has been training people for the last decade. He said he normally trains fighters. I'm not sure exactly what that means besides they're probably pretty tough. I knew that we would be doing functional fitness and stuff where you didn't need a lot of equipment, but didn't really know what else to expect. I should have known that since he's a Marine and trains fighters it was going to be tough. And it was, but it was also completely do-able.
Plus, the big bonus was that it wasn't raining! That might not seem like a big deal, but when it's been raining for 10 days straight sunshine is a real perk. However, despite all the sun the field was wet. I'm talking standing water wet. No big deal, I can run through water. Right? Um, yeah. How about ab work, push ups, and other weird warm up activities in the mud. Once I was saturated it wasn't that bad, but sitting in that cold nastiness the first time was pretty gross. And it stunk. My friend and co-worker Rhonda said it reminded her of the cow fields back home in Louisiana.
The instructor, Jeff, believes in circuits. So, we would start at one station do a few exercises for a timed period and then run to the next station and start some more exercises. We did some arms, abs, back, and legs. I'll probably be able to tell you what else we worked out when I wake up sore tomorrow. Despite the mud and the difficulty level, I loved it! I thought it was fun (I can hear my lunch friends snorting now and perhaps shaking their heads, but they know I'm sporty). I can't wait until next Saturday's session! Woohoo! Here are a few pictures of the aftermath: 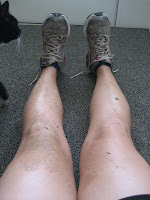 My legs and shoes were so stinky and muddy that Oscar had to come investigate. 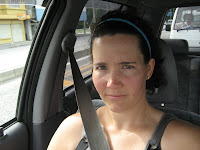 My shirt got so filthy that I drove home in my sports bra - something I NEVER do! 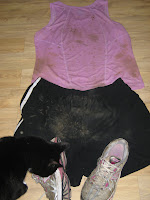 My outfit after the workout. Everything was completely soaked. Oscar - just because the blog is always about Rana, Rana, Rana. 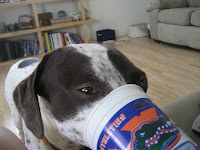 Rana liked the after workout activity of cleaning my smoothie cup. Don't worry it went right in the dishwasher.
Posted by Chris and Amy at 5:34 PM

This sounds like great fun. Any old excuse to parade around in the sports bra (Brenda or Fiona). Lovely to see Oscar. Have a good weekend.

That class sounds fun! I got over the wearing just a sports bra quick. When I run, I sweat like a whore in church, so usually halfway through my run, I shuck the shirt and finish in my sports bra. I don't care if my belly jiggles, cause the people driving by aren't the ones out there running and getting a workout. OK, I'll stop ranting.