Oh, what a weekend! I'm not sure we even had time to breathe. I started the weekend off right with a free 13km (just shy of 8 miles) Perimeter Road Fun Run. This run had me nervous mostly for the fact that I haven't run anything over 5 in the last 6-8 weeks. Once the Izena triathlon that I was training for was cancelled, I kind of gave up on longer distances. However, I tried to prepare right - I drank a lot of water the day before, had leftover pasta for dinner, and was in bed by 10 even though I worked until just after 9. I also was prepped for the morning: 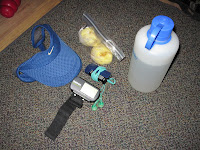 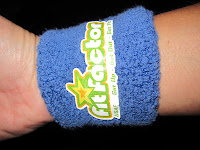 The run was the perimeter of the flight line around Kadena Air Base. There are a couple medium hills at the end (they felt bigger when I was running), but otherwise it's pretty flat. I was very happy to run the whole thing (walking through 2 water stations) in 1:15. I had about 9:40 miles. I know I can go faster than that, but with my limited training I was satisfied.
When I came home my incredible husband told me to eat, shower, and nap because he was going to do the grocery shopping! I can't tell you what a gift that is! Commissaries (military grocery stores) are absolute madness on the weekend and I was so happy to not go.
The rest of the day was pretty low key because we were saving up all of our energy for the 17th SOS Squadron Party! These parties are fun and can get a little out of control. Apparently, we used to have it at the O-Club, but they politely told us we weren't welcome back. Now we have it at the NCO (non-commissioned officer's) club, but they've given us a closing time of midnight.
The dress this year was "black and white with a colorful accessory". It was like they had looked in my closet to pick the theme. I only have maybe 4 dresses. Two of them are ridiculously similar (I don't know what I was thinking), including the one I wore to last year's party. One is a wrap dress and I'm starting to think the print is obnoxious. That left me with one black and white dress that I paired with a red belt and some fire corral jewelry that I picked up in Thailand and Singapore. Chris looked fabulous in his black coat, a new grey shirt, and new tie. Here we are: 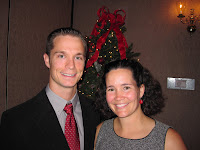 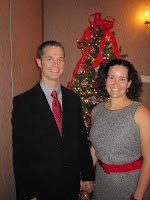 Man, we're adorable!
Here's Chris with Dave Rabe (his co-pilot when thy were deployed to the desert earlier this year): 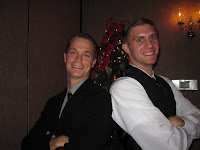 Here's me with Konnie Glaze (from candy making night). She is by far my favorite Commander's wife ever. She made England a great experience. Now her husband is the Deputy Group Commander so they have to attend 7 (I think) of these parties! I do not envy her on that! 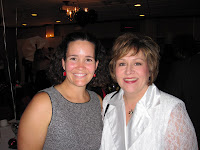 Here's another one of our favorite people, Brandon Pablo! He was with us in England and this was his first 17th Christmas Party. 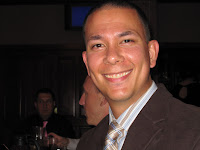 Chris with his cycling partner BJ: 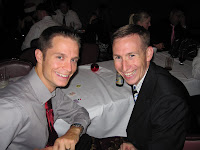 Apparently the year before we arrived there was some baseball played with the ornaments. You get the idea - shattered glass everywhere. This year the decorating committee was smart and got "shatterproof" ornaments from Wal-mart. However, that didn't stop our table from hoarding all of the ornaments! Here's Kelli Dillon gathering some treasures in her dress: 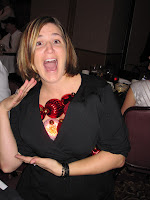 and transferring them to Brook Kelly: 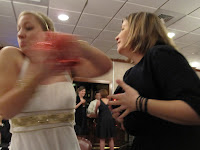 We never really did anything with them, but we sure had a lot of balls!
Here is the squadron commander with some lovely ladies - Amy Sarduy and Jessica Hampton. Yes, he really is the commander, the boss, the man in charge. And yes, he really is wearing leather pants and a leather vest (ok, it might be pleather). In his defense, he and a couple other guys from the squadron made a band and performed, but still leather pants? Yikes! 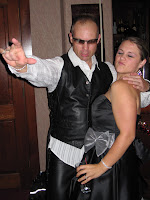 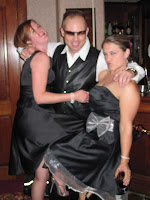 This is Jess, Joleen Baker, and Michelle DeCarlo making a drink selection. The bar stayed open and free-flowing all night thanks to the Revolution. 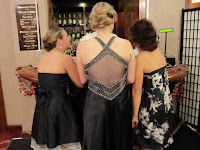 Every year there is an auction that pays for the party. These auctions don't produce anything valuable except maybe blackmail pictures. People put bids on the people they want to see dressed up. There are a few costumes, including Santa, the Grinch, an elf, the sugar plum fairy, and this year they added a naughty Santa's helper to the mix. When we were in England Chris was lucky enough to get voted into the sugar plum fairy position. Let's have a looksee: 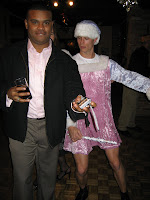 I can honestly say I've never had so many spouses come up and tell me what nice legs Chris has as I did that night.
Luckily for Chris he managed to fly under the radar this year. I have a feeling next year could be a different story. Here's this year's line up: 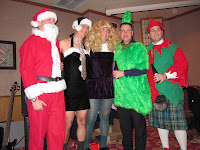 Than as Santa, Brandon as his naughty helper, Redman as the sugar plum fairy, the DO (second in command) as the Grinch, and Chadler as the elf (please note that the kilt was his).
My favorite was definitely Pablo: 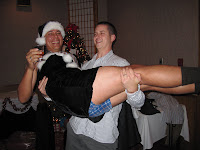 He looked ridiculously good in that dress!
As the party wore on I thought it would be a good idea to get a little more comfy: 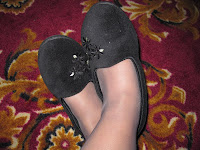 This might have been my best idea ever. Nobody even noticed the slippers!
Also as the night wore on, people got a little crazy: 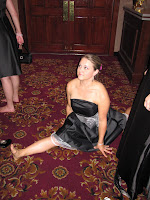 My friend Jessica felt the need to prove to us that she can still do splits. I don't think any of us were telling her she couldn't, but now we have proof that she can indeed still do them.
Jess is one of my favorite people on island. She's very bubbly and good at bringing people together. Here we are together: 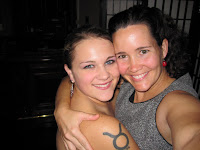 Here's Chris getting down with a tambourine: 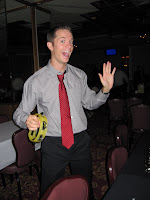 One more shot of us looking cute and then I'll move on to Sunday: 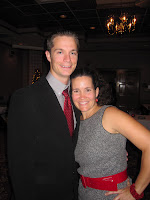 When we woke up Sunday we decided that Rana needed a little fun time so we headed to the beach. On our way we stopped at Subway and while we were gone Rana decided to take over my seat. Naughty dog! 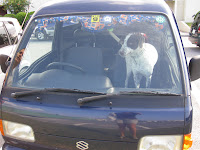 But she's so stinking cute. I like Chris' look of concern in the reflection.
When we got to the beach, Rana made a friend - Riley. 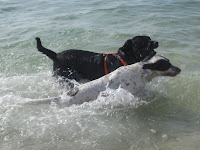 Riley was a little older, but very patient with our obnoxious pup. Labs are such good dogs.
After the beach we had to head to my work party - a pot luck at the Youth Center. It wasn't as crazy as the 17th party, which was probably a good thing.
Here's Chris getting crazy on the poly-pong table: 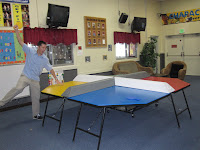 Here's Yuriko (in black), her daughter, and some of her 9 grandchildren. They were all very sweet and well behaved. Yuriko is our mama-san, cleaning lady. She is so sweet and always makes these incredible flower arrangements for the Youth Center. 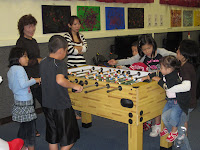 Here is Zoey (her mom, Karen, works with me in the rec room): 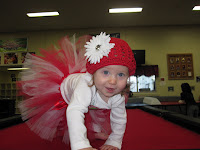 These aren't the best shots, but just so you can start putting faces with names here our my co-workers: 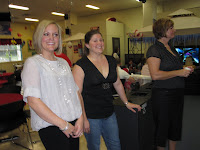 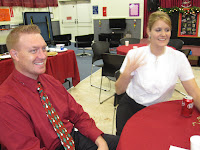 They brought a chocolate fountain. It was a huge hit, especially with the kids: 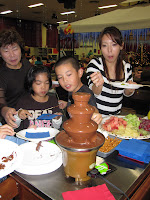 We had an incredible potluck, an ornament exchange, and some good Christmas music. It was a very nice afternoon.
Posted by Chris and Amy at 11:32 PM

Thanks for sharing all the fun pics! That party looks like it was too much fun...and I think my fave is the leather vest! Great job on the race as well..sounds like you were able to get a good run in even if you weren't as prepared as you wanted to be.
Love the dog park pics as well (of course)..looks like Rana has a ton of fun in the water!
Courtney
adventures in tri-ing

I really enjoyed this. Good job on the run. Wish I could have been there.

The party looks fun. Everyone seems to be having such a good time.

It looks much more fun with all what you are doing than the stuff you did in England. Of course I guess you have to fill your time with something as I am not there!!!