So, this picture blog doesn't include everything (people driving in huge visors and guys in baseball uniforms were mysteriously absent these last couple days), but here are a few things you are sure to see while driving in Okinawa. 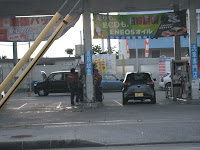 Sorry this picture is so far away, but it is gas station attendants! I think that an attendant has to pump your gas, but I'm not sure because we get ours on base. The Japanese gas is about 2 times as much as our prices, which makes it half as much as England gas. 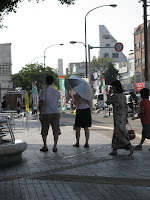 Ladies with parasols. It's not uncommon to see someone covered head to toe on a really hot day. 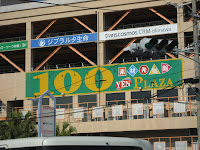 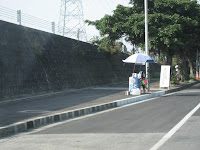 Roadside ice cream stands - I haven't tried one yet, but this is going to be a long, hot summer. 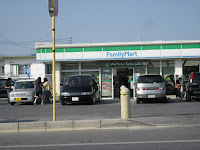 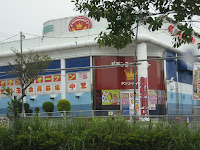 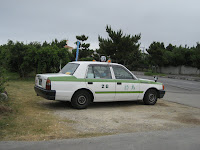 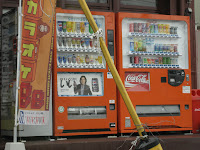 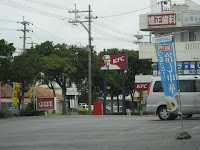 American fast food - KFC and McDonald's are the most common 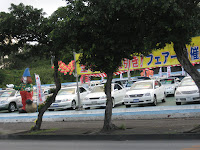 Used car dealerships - I swear there are more cars than people on this island. 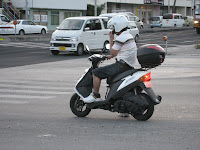 This is a 2 for 1 picture - there are LOTS of scooters and cell phones! 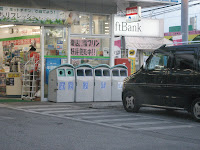 There are lots of recycle bins, but very few trash cans. 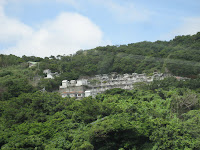 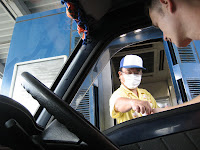 People with faces masks and yes, they wore them before the swine flu outbreak! 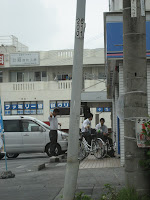 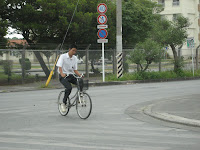 Commuter bikes - no matter the age of the rider you almost always see commuter bikes. It was explained to us that it's so nobody feels bad about riding a P.O.C. There's something to be said about a country where people do what's good for the whole instead of the individual. 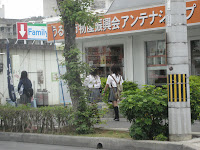 School girls in uniforms with too short of skirts. This picture is actually pretty tame. I swear some girls wouldn't be able to bend down to pick up a chopstick if they had to! 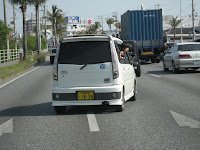 This is my favorite - kids hanging out of windows! There apparently is no law that kids have to be belted in any way while riding. I've seen kids hanging out windows, standing up, roaming around the backseat, in grandma's arms in the front seat - it gets scary. I love this one because their bumper sticker says 'Child on Board". I guess it's my job to not hit them and hurt the kids since they're not concerned enough to buckle them up.
I hope you've enjoyed this brief tour of Okinawa.
Posted by Chris and Amy at 5:40 PM

Love the pictures! But I can so see you trying to take pictures all sly without getting caught - i.e. looks like the face mask picture was taken from your lap. LOL!

When we first arrived here we were told that Okinawans believe that the safest place for a child in a car... is in the mother's lap.

This is a funny post, mostly because it is true. That scooter rider had better be careful. I got my license suspended over here for talking on my cell while driving. Yeah, that's right, I'm a criminal.